On Michigan’s world-renowned Mackinac Island, the sweet aroma of fudge wafts out onto the street from four unique Ryba’s Fudge Shops. Passersby stop in their tracks to watch as confectionary artists pour the hot molten liquid from the copper pots onto the marble and begin handcrafting the decadently delicious fudge loaded with flavor. Recipes perfected over four generations and a carefully honed process, result in the creamiest and smoothest fudge. 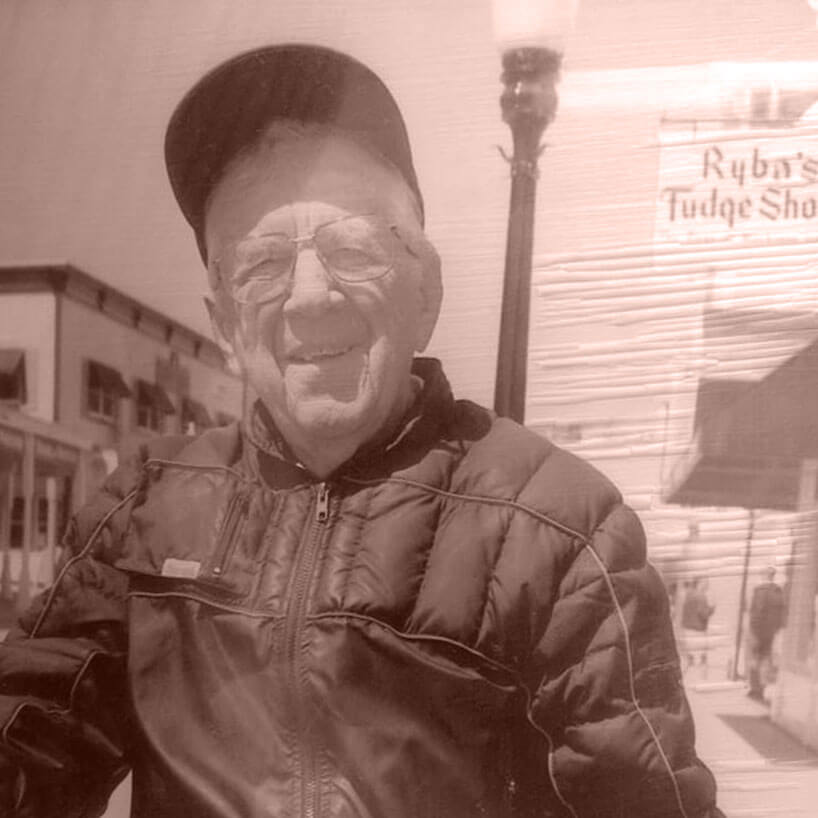 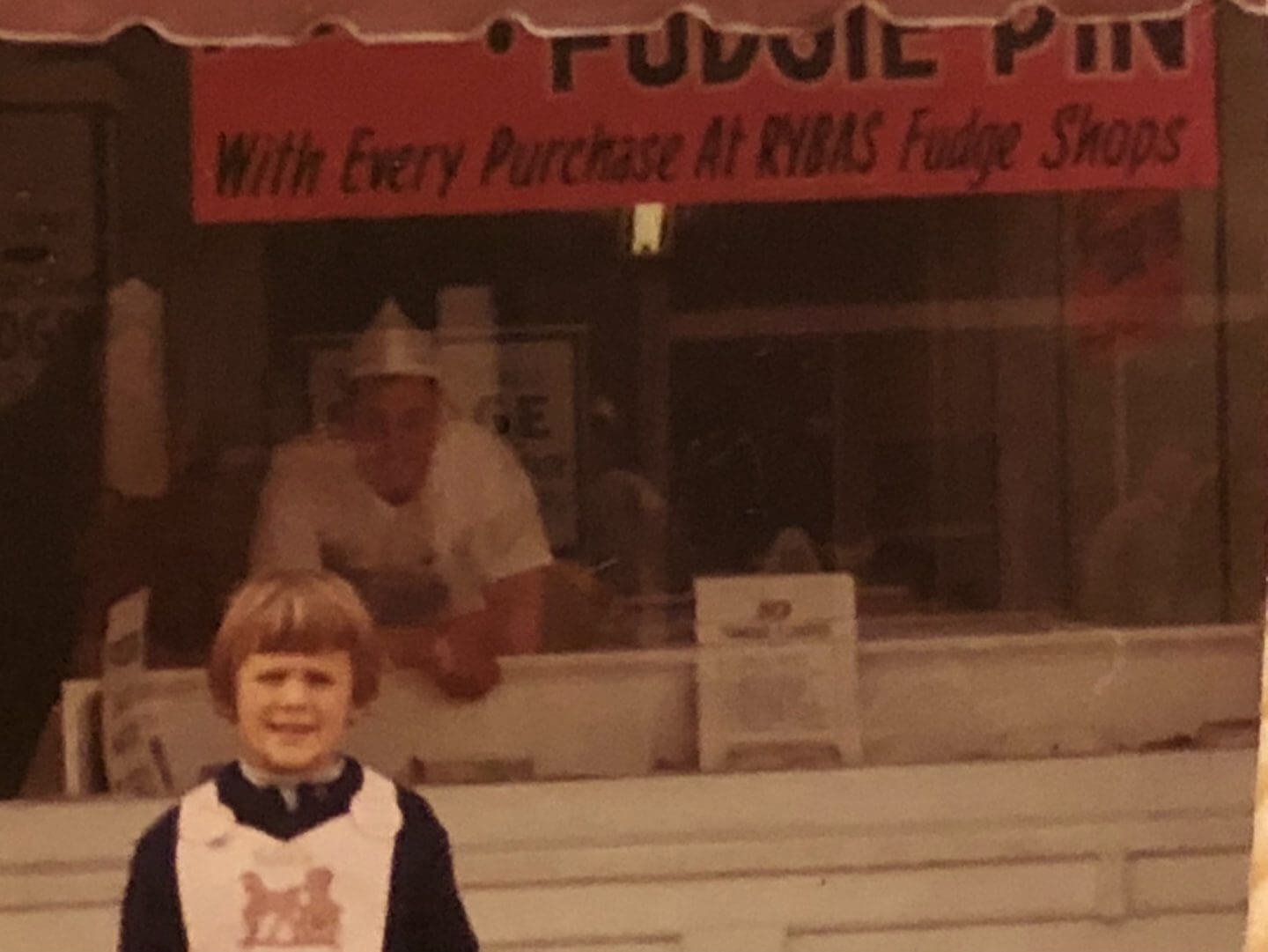 Victor Callewaert and his daughter Amy (granddaughter of Harry Ryba) 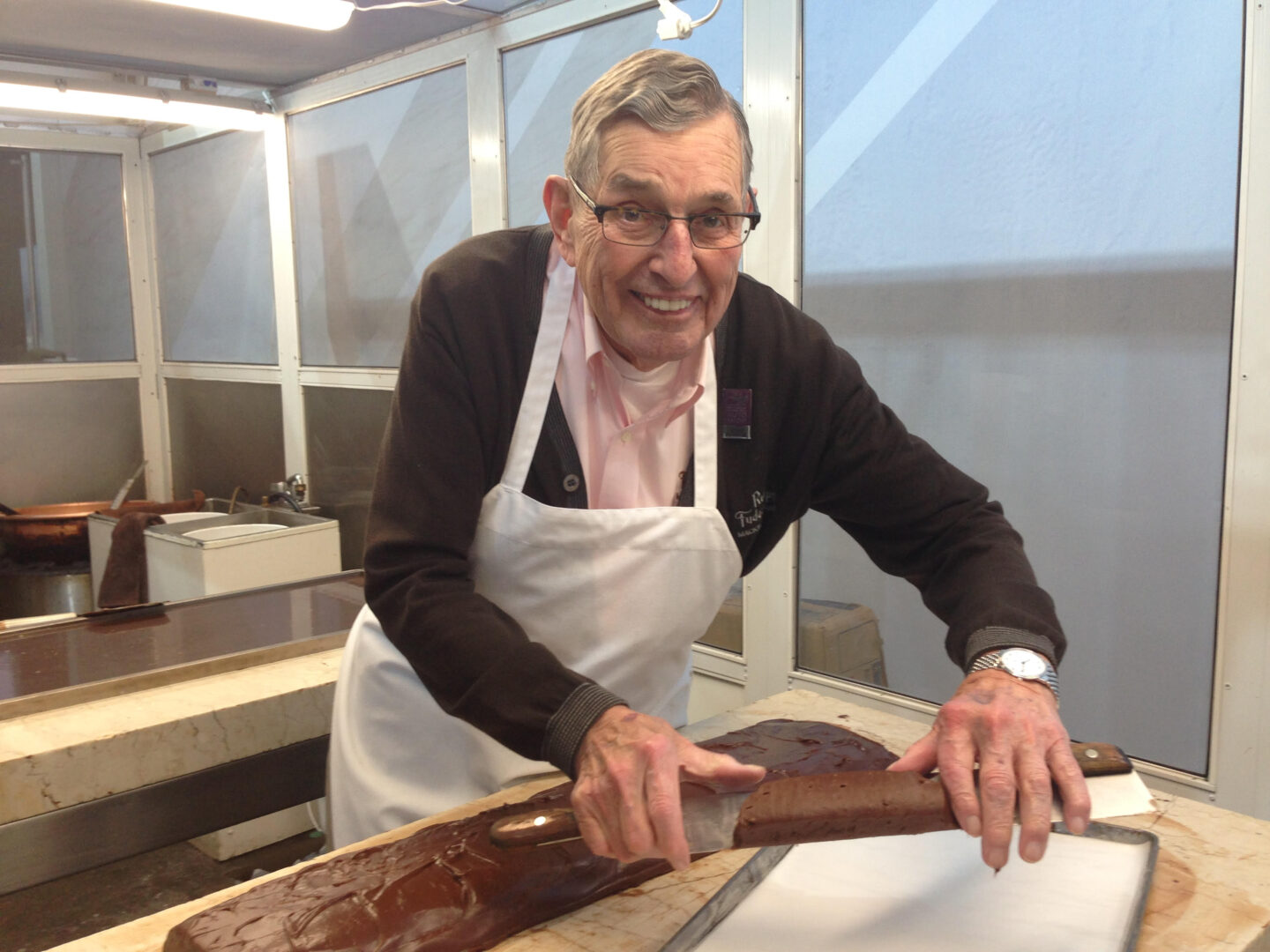 Victor taught his children and grandchildren his master craft, ensuring that the legacy lives on.

The sweet beginning of the Ryba family’s handcrafted confections began on Detroit’s East side in 1936, when Harry Ryba opened his first sweet shop at Jefferson and Chalmers. A decade later, Harry opened a second Detroit confectionary where he began to hone his skill as a master fudge maker. Soon after, a precocious teenager began selling newspapers outside the busy shop. Both irritated and impressed, Harry hired Victor Callewaert, his future business partner and son-in-law.

WHAT’S A FUDGIE?
Ryba’s fudge takes off when the ambitious pair begin peddling their signature fudge at events, festivals, and fairs – most notably the Detroit and Chicago Auto Shows, where Ryba’s becomes the official sweet treat of the marquee events. As these events and venues grew, so did Ryba’s.

Harry Ryba and Victor Callewaert move operations to Mackinac Island in 1960. Here, Ryba’s Fudge Shops is where fudge making became a public spectacle luring visitors to the front windows of Mackinac Island’s fudge shops. Ryba’s is where tasty new fudge flavors are invented, where fanning the sweet scent of fresh fudge into the street was pioneered, and where tourists are still confectionately referred to as “Fudgies.” Harry Ryba’s affectionate name for the visitors seeking the sweet treats in Ryba’s signature pink box.

How It's Made Meet The Fudgemaker

Over the next thirty years, Ryba’s Fudge Shops open in Wildwood and Atlantic City, New Jersey; McCormick Place and Navy Pier in Chicago, Illinois. While these shops have since been closed, the sweet aroma of fudge still wafts onto the streets of Mackinac Island from four unique Ryba’s Fudge Shops. Passersby stop in their tracks to watch as skillful sweets makers pour hot, molten liquid from copper pots onto marble slabs to make decadently delicious fudge. Recipes perfected over four generations and a carefully honed process, result in the creamiest and smoothest fudge, packed with flavor. 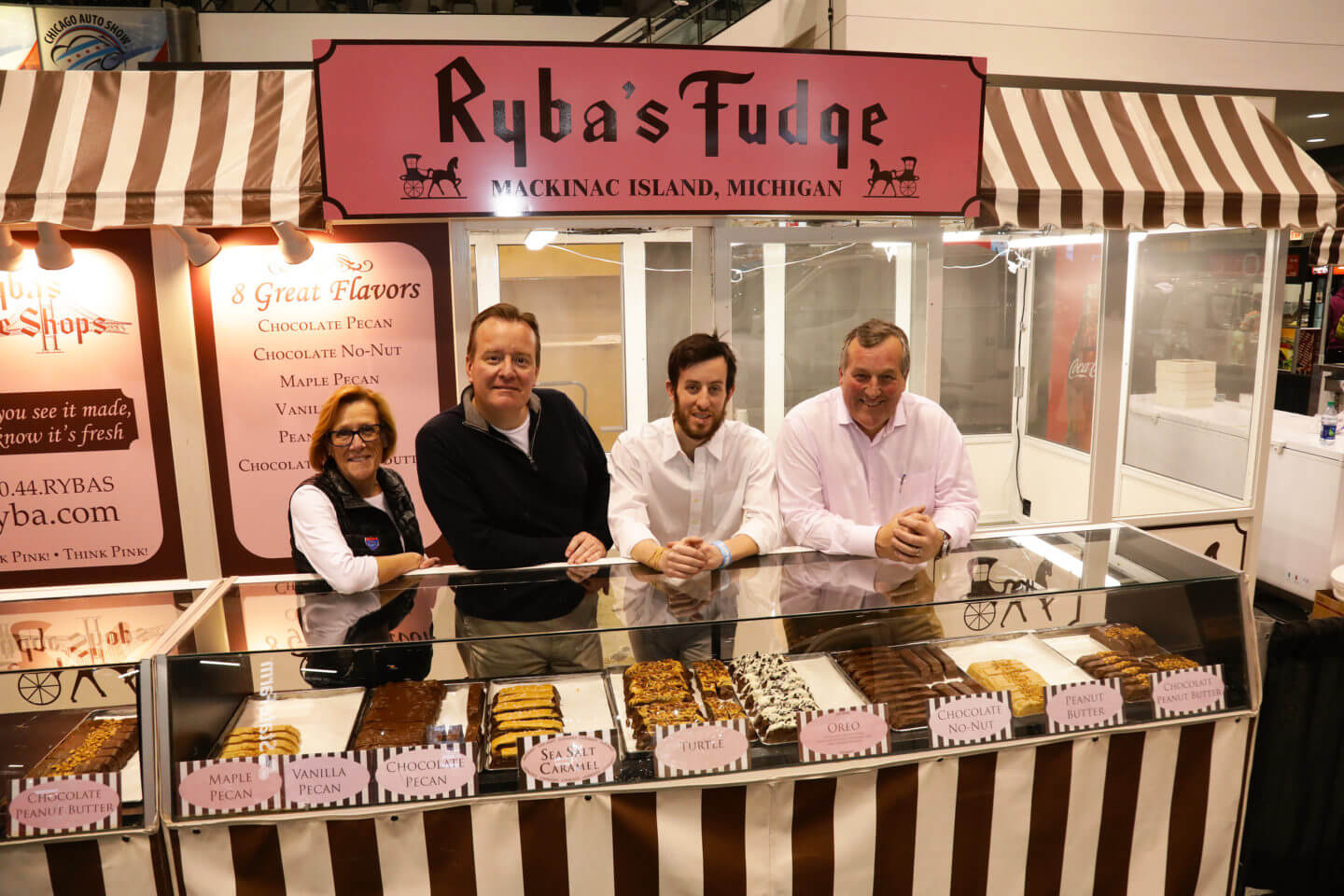 THE LEGACY LIVES ON

It’s no wonder Ryba become known as the “Fudge King” of Mackinac Island, passing his title on to Victor, who in turn taught his children and grandchildren his master craft, ensuring that the legacy lives on today.

✨Magic✨ happens when creamy peanut butter and decadent chocolate melt together to form a delicious duo. ...

✨ Throwback ✨ to 2007 when Ryba's Fudge was featured on The Early Show. The crew made fudge on the porch of the Grand Hotel. ...

It was the late 1940's when a precocious teenager began selling newspapers outside Harry Ryba's donut shop. Both irritated and impressed by the young man's tenacity and persistence Ryba offered Victor Callewaert a job. Little did he know that he was hiring his future business partner and son-in-law. The ambitious pair grew Ryba's Fudge into a Michigan family tradition to be enjoyed for generations to come. ⁠
⁠
Learn more about Ryba's sweet tradition 💕⁠
https://ryba.com/rybas-story/ ...

It is with sorrow we share the passing of our beloved patriarch, Victor Callewaert, longtime Mackinac Island resident and prominent business owner. In recent years, Vic could be seen cruising through downtown donned in his signature pink Ryba’s Fudge shirt and Michigan baseball cap, ever ready with a wink or a wave. As a steward of Island House Hotel, and enthusiastic fudge connoisseur, he will be fondly remembered for numerous contributions to the Mackinac Island community. It is our honor to carry the torch ensuring that Victor’s legacy is proudly carried into the future. Friends wishing to remember Victor are reminded to “Think Pink,” as he would say, and may contribute to Mackinac Island’s St. Anne’s Catholic Parish or Medical Center; or the charity of one’s choice. Services will be announced as details are available. ...

Happy Mother's Day from Mackinac 💕 We are enjoying a few of our favorite things this morning. Fresh flowers, gorgeous view, and a tasty treat! Sending love to mother's every where, every day! ...

Wishing the sweetest of Mother's Days to women everywhere 💕 leading the way 💕 setting the example 💕 raising the bar 💕 fighting the fight 💕 holding the hands 💕 kissing the wounds 💕 cleaning the messes 💕 ...

Welcome Ryba's Fudge Shop 💕 We are excited to be open!

No chocolate is wasted in the making of this fudge 💕 ...

For the regular moms, and the cool moms 💕 Last chance to order to arrive in time for Mother's Day! ...

Our definition of Fill Er' Up 💕 Gift basket, easter basket, bike basket, the bigger the better! ...

For the mom that all of your friends wish they had 💕 ...

Flipping Fudge 🤎 It takes some serious arm strength to work this molten chocolate into a loaf of Ryba's creamy, delicious fudge. ...

For all of the times that you kept her up at night 💕 Make your Mother's Day pre-order today⁠ ...

Would you say that Mackinac is your favorite dessert-ed island? 😂💕 ...

Hand pouring our hearts out one delicious batch at a time 💕 Look at the steam roll off of the lava hot chocolate! The marble slabs draw the heat from the piping hot liquid and as it cools we begin to see the sweet beginnings of the creamy, delicious fudge you know and love. Soo good! ...

Get your Fudgie Fix

Be the first to know about fresh fudge flavors, limited-edition offers, and a chance to win a Mackinac Island getaway. It’s free to join the 906 Rewards Club!

COLOR ME PINK & COUNT ME IN!